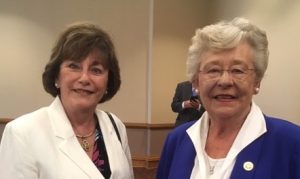 S³ was pleased to be a sponsor for the Alabama Update Luncheon on July 10, 2019 at the Huntsville Madison County Chamber in downtown Huntsville. The featured speaker for this event was Alabama Governor Kay Ivey. Prior to the luncheon, S³ CEO Ms. Jan Smith, SVP Bob Johnson, AMCOM Express Director Jim Charlton, and JRS3/MDA Director Jeff Mockensturm were invited to attend a major donors’ reception.

Governor Ivey is no stranger to hard work, having worked on her father’s farm in South Alabama. After graduating from Auburn University, Governor Ivey worked several jobs until she became the Reading Clerk of the Alabama House of Representatives and was the Assistant Director for the Alabama Development Office.

While pursuing her service to the State of Alabama, Governor Ivey has accomplished many “first” distinctions. In 2002, Governor Ivey was the first Republican-elected State Treasurer since Reconstruction, and was re-elected in 2006. In 2010 she was elected Lieutenant Governor, which made her the first Republican woman to hold the office in Alabama history. In 2017, Governor Ivey was sworn in at 54th Governor for the State of Alabama due to a vacancy and elected to serve a full term in 2018, which made her the first Lt. Governor of Alabama elected to a full term after taking over as Governor due to a vacancy. As a Girls State alumnus, she is also the first to be elected to a constitutional office in Alabama.

Governor Ivey is an active member of her church, serves as a board member to several organizations, and has received numerous awards for her service to the State of Alabama.