S3 Pays Tribute to Flag Day and the Army’s Birthday

S3 Pays Tribute to Flag Day and the Army’s Birthday

S3 paid tribute to Flag Day at their headquarters office 14 June. Flag Day is an important remembrance and celebration of “Old Glory” a critical symbol reflecting our Founding Fathers’ beliefs, values, and sovereignty of the new Nation. 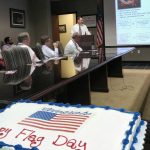 Flag Day is not an official federal holiday; however, it is at the president’s discretion to officially proclaim the observance.  Flag Day is celebrated on June 14 to commemorate the adoption of the flag of the United States, which happened on June 14, 1777, by resolution of the Second Continental Congress.
The Proclamation of President Woodrow Wilson officially established Flag Day on May 30th, 1916. While Flag Day was celebrated in various communities for years after Wilson’s proclamation, it was not until August 3rd, 1949, that President Truman signed an Act of Congress designating June 14th of each year as National Flag Day.

On June 14, 1775, two years prior to the Flag Resolution, Congress adopted “the American continental army”. So the United States Army also celebrates their birthdays on this date.  Happy 243rd birthday to the Army!