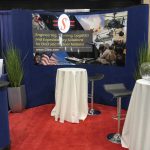 S3 proudly participated in the 2018 Association of the United States (AUSA) Global Force Symposium and Exposition at the Von Braun Center, Huntsville, Alabama from 26-28 March 2018.  The three-day event featured presentations from Army leadership including keynote remarks from the Secretary of the Army, the Undersecretary of the Army, and the Vice Chief of Staff. Other senior Army leaders such as the commanders of Forces Command, Training and Doctrine Command and Army Materiel Command also participated.

S3 manned a booth in the exposition hall to promote our corporate business interests as they pertain to the US Army.  Special thanks to the folks who helped man the booth and respond to current and future customers and corporate teammates: Lisa Johnson, Will Stewart, Kevin Irvine, Dennis Vaughn, John Briggs, Mark Hannah, and Dan Coulter.   S3 also participated in the ‘Warriors To The Workforce’ presented in association with Still Serving Veterans on Tuesday, March 27.

This one-of-a-kind event was part of the American Freedom Foundation’s nationwide initiative to help Veterans find jobs. The event brought together major companies from throughout the country to profile their services and provide employment opportunities for our Veterans, transitioning service members and military spouses. Our booth was manned by Joanna Hillis and Bill Rogers.  Last but not least, S3 was a Silver Sponsor for the ‘Rocket City Bash’ where over 800 participants celebrated under the Saturn V at the US Space and Rocket Center’s Davidson Center on the evening of March 27th.