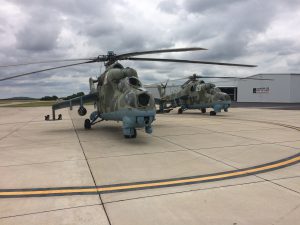 The USAF Weapons School is highly selective, providing graduate-level tactics training to more than 150 Air Force instructors annually in more than 20 weapons systems.  The school is based at Nellis AFB, NV and is under the command of the 57th Fighter Wing. Mi-24 Instructor Pilot John Totty has flown the Mi-24 since 2002, and is a former USAFWS cadre instructor.